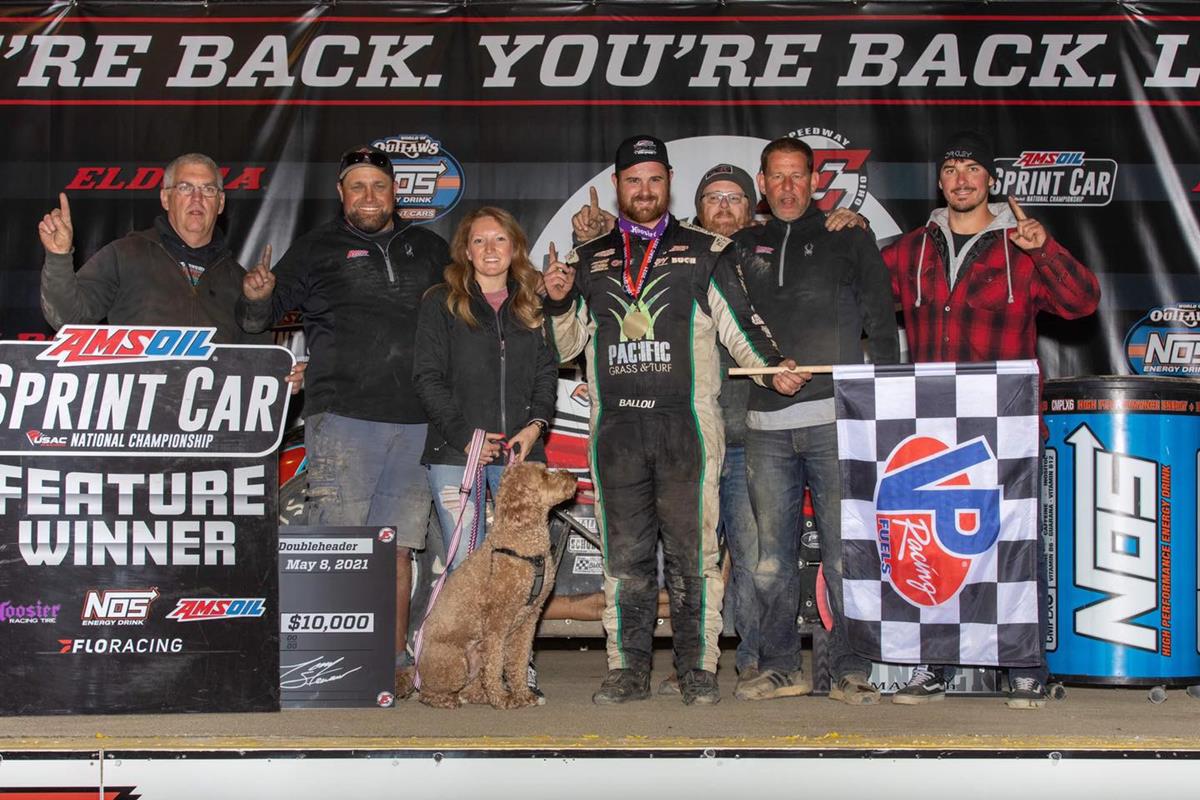 Ballou Back in Victory Lane with USAC

PETERSEN MEDIA: The last time Robert Ballou found victory lane, there was no celebration. Winning at Kokomo in June of 2019, contact after taking the checkered resulted in a badly broken arm, and a very long road to recover. Saturday night, Ballou was able to finally enjoy the spoils of the winner’s circle again as he bested a stout field at Eldora Speedway and claimed his first USAC win in 1,056 days.

“It has been a very long road to get back here, and I have to thank so many people for sticking by my side,” Ballou said. “To run second to Tyler Courtney in the day show and come back and hold him off to pick up the win during the night show is a shoot confidence boost for our team and we will certainly build off of this.”

Returning to action on Saturday afternoon, the Rocklin, CA driver would race to a win in heat race competition and line himself up in the second row for the feature event.

On a very slick racing surface early in the day at the famed ½ mile speedway, Ballou would make a couple of quick moves to take over the second position. While he moved into second, race leader, Tyler Courtney, had built up a huge lead.

While both drivers were able to get through traffic flawlessly, Ballou would be unable to cut into Courtney’s lead as he capped the feature off with a second-place finish.

A new program on Saturday evening would see Ballou continue to show speed at Eldora Speedway as he timed his mount in eighth fastest in time trials on this night.

Racing to another heat race win, this one came at a cost as Ballou noticed an issue with his engine upon returning to the pit area, and it would turn into a mad dash to get a fresh power plant bolted into his frame rails.

With all hands-on deck, the team worked right up until the eight-minute horn blew, and Ballou was able to make the call as he took the green flag from the pole.

Ballou would keep his strong weekend going as he jumped out into the lead and worked right along the wall on the slick surface. As the laps clicked off and traffic became a factor, Ballou showed his car was good enough to go anywhere he needed as he was able to continue his torrid pace out front.

As his lead did shrink up in the final five markers of the race, Ballou would hook up in a wildly talked about battle with Courtney, who was looking for his sixth straight win at the track.

The duo would exchange massive moves in front of the field, but in the end, it was Ballou beating him to the stripe and grabbing his first win of the season.

“After our heat race, we noticed that we had an issue with our new engine, so we went to work and just got it swapped out in the nick of time,” Ballou said. “Nobody has more dedication to this sport than my guys and everybody that is behind me, so a huge thank you to them for all that they do.”

ON TAP: Ballou will do some winged racing this week as he will be at Jacksonville Speedway on Friday night, and Route 66 Speedway on Saturday.